skip to main | skip to sidebar

Thinking of sharing your technology projects? Have a Technology Student Showcase~! 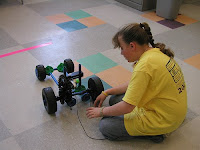 photo by Alice Barr
Sometimes you make a plan because you want to learn something new, other times you make a plan and when you learn how much you didn't know you are so glad you followed through! Well, on June 13, 2009, Alice Barr and I drove to Newport , Maine in order to attend the Technology Student Showcase at Sebasticook Valley Middle School or here at Sebasticook Valley Middle School. Am I ever glad we did! Not only did Alice and I have a good time catching up about technology in both our schools, our new superintendents, new macbooks our teachers and students will receive in the fall, but, also we were excited to participate in a student technology showcase and hopefully bring some ideas home to our respective school districts.


We were greeted in the parking lot by Drew and his teacher Keith Kelley, who explained how students chose a project to rebuild an old Mustang convertible. Drew excitedly and carefully explained the steps involved in the rebuilding process, how hard it was, how many times they had to rebuild the steering mechanism and how proud he was to see the finished product. Then Kern Kelley met us at the sidewalk and began the tour of the Technology Student Showcase Spring 2009. He handed us a Scavenger Hunt, so we would be sure to view each project spread throughout the school building. We first ran into a student carrying around an Acer Netbook, headphone and mic attached, Skyping with Cindy Lane, a google certified teacher from St. Louis, who had made an appointment for a 15 minute tour of the showcase event. How many of your middle school students would be comfortable talking to a computer screen, as they video conferenced their way through a tour? Does this sound like a marketable skill for our 21st Century Literate students?

Then we viewed the mock up of the building and school mascot, that the students had created in Google Sketchup. The students had re-created their school building in 3D, right down to the detail of the full size moose in the school library. (after all it is Maine). There was a plugin for Google Sketchup that allowed anyone to hold up a specific piece of paper with a print out of a design in front of the video camera which portrayed a 3D visual of the school mascot or the school. How many of your middle school students would be comfortable designing a mock up of their school or any item related to school? Does this sound like a marketable skill for our 21st Century Literate students?

Then we proceeded upstairs to the Gallery of product designs. This was a gallery of items that 7th graders built in a design class, based on a raw skateboard decks from a local Maine business of a well known skateboard. The students were challenged to use a skateboard or multiple skateboards to design something that they would buy, or others would purchase. Not only were items for sale during the showcase, but if an item did not sell, then the teachers were going to put these items out on ebay to recoup some money for purchasing more supplies, or some student entrepreneurs would actually split the profits after paying for their own supplies. There were skateboard photo frames, skateboard shelves, skateboard push carts and even a very inviting game chair made with skateboards with cushions. How many of your middle school students would be comfortable designing a product for re-sale? Does product design sound like a marketable skill for our 21st Century Literate students?

After that we walked through the darkened gymnasium where several groups were playing Wii bowling, Wii exercise and RockBand. I was disappointed not to get a chance at RockBand, but we were much too busy. We traveled upstairs and found a part-year Art Room, and part-year Technology Education Room. Keith explained that he works at both middle schools for a half year each. He has a specific curriculum for each grade level. 5th and 6th graders work on hands on projects and build self propelled or wind propelled boats, or motorized cars. Then 7th graders begin product design using guitar kits or skateboard decks. Finally, 8th graders spend a half year designing and building their own skateboard from scratch. They use drills, routers and all kinds of paints and polyurethane to complete their projects. The student create and vote on a graphic design for their year as 8th graders. The logo is then transferred to each skate board. The students have skateboarding and skateboard safety in their physical education classes. This is a team effort! How many of your middle school students would be comfortable designing a product for their own use? Does product design sound like a marketable skill for our 21st Century Literate students?

Finally, Alice and I ended up in the computer lab where the 8th graders one year, built computer towers for a lab for student use. There were some 6th graders explaining their projects, their osprey webcam, their osprey book and their research projects as well as their Kerpoof video projects. Throughout all the projects and conversations we had with students there were 2 common denominators. One, most often the students spoke of collaborating on their projects, not only in the one class, but collaborating with a team who worked asynchronously on the same product. How did they manage? The just wrote notes, said one student. However, when pressed, they wrote notes in Google Docs when appropriate and other times, they left big notes taped to their robots to let their team know what needed to happen next. Or in a research team, the students worked in a google spreadsheet in order to determine the next steps. These students articulated that this is the wave of the future and they are just practicing what they imagine they will be faced with in their workplace someday soon. How many of your middle school students would be comfortable researching, collaborating asynchronously? Does this kind of work sound like a marketable skill for our 21st Century Literate students?

Check out the video for a tour of our day.http://www.youtube.com/view_play_list?p=6C2360791F288EFF or view here What are you doing to practice 21st Century Literacy? Will you be marketable in the 21st Century? Oh, BTW, the 21st Century is now.
Posted by Cheryloakes50 at 9:10 AM 3 comments:

Where does your library fit in the 21st Century Skills continuum?

This is a response to Darren Drapper's latest post at TechLearning. The post is a collection of quotes from some of our best thinkers and practioners in the field of library media science. Darren's question What is your vision for the ideal school library and what role do Media Specialists play? prompted my response:

"I see the ideal school library media center as the hub of our ideal media literate schools. I take the word media very literally and seriously. The hub should be the life of the school, the staff, the students and the larger community. The ideal school library media center should be the conduit to the world and other library centers. Where better to exemplify the collaborative nature of our lives than the library media center? As many of us know from experience, the virtual resources we have at our finger tips are exponential. We can use them all to our advantage, we can solve problems by interacting with digitized information. However, unless we have that ideal library media center at our disposal and an opportunity for some f2f, face to face, interaction, we will be living in a echo chamber and our solutions and ideas will not resonate with our world. My ideal library media center would have a window to the world where anyone, staff or students could video conference with an individual or group and get out of the echo chamber. What an opportunity! Can't wait to hear some other ideas. Thanks for the post Darren."

What is your ideal library media center all about?
I know our public librarian and I have had this conversation. I didn't have any answers at the time, but I know it is a conversation worth continuing. I am in the middle of proposing a 3 year Technology Plan for our district. I know the time my committee and I have spent working on this has been informative and will change how we go about the business of creating 21st Century Citizens. The consequences are immense, the conversation needs to happen, the disruptive push needs to move our school walls and our library media center walls.
Posted by Cheryloakes50 at 3:10 AM No comments: